**Reposted from my personal blog.

The other day one of my friends told me she doesn't know what I do.  My sister has told me the same thing before.  I even have a wetland manager I interact with who doesn't know what I do.  Sometimes I don't know either.  It's hard to remember sometimes that everyone I meet doesn't know or care about Great Salt Lake wetland ecology as much as I do.  As the conversation with my friend continued, we discussed Radiolab, and how great they are at bringing science to the masses.  I'm a big believer in making science relatable and in helping people understand what I do and why they should care, but that's hard work.  Everything about graduate school and academia drives you to focus on gaining acceptance from faculty members by catering to their area of expertise and to woo funding agencies by closely following their jargon-laden calls for proposals.  All of that aside, I can't think of a way to make my research Radiolab-cool, but I don't have any impending deadlines and thought I'd take a shot at making my research understandable here on the blog.

The official title of my project is "Determining the impact of impoundment and water management on Great Salt Lake wetland condition."  Blarg.  Long titles can be descriptive, but they're also mind numbing.  To show you why you might care about my project I'll deconstruct the title to talk about four things: 1) wetlands are amazing, 2) Great Salt Lake wetlands are extra amazing, 3) impounded wetlands are intriguing, and 4) wetland condition is a way to answer my pressing questions.

1) Wetlands are amazing.  Wetlands are soggy places.  Some are wet and soggy all year long and some are only muddy for part of the year, but they're all wet long enough to be different from terrestrial environments like forests and deserts, but not flooded deep enough to be considered aquatic environments like a lake, river, or ocean.  Wetlands are the swamps, marshes, bogs, and quagmires you've all hopefully wandered into at some point.  Wetlands are considered ecotones, they're transitional ecosystems between terrestrial and aquatic environments and share qualities of both.  In the larger scheme of things, they look like this:
There are three basic features of wetlands that make them unique and awesome: water, wetland plants, and hydric soils.  Water is what makes it all happen; water tends to be shallow in wetlands (less than 30 cm or 1 foot) and slow moving (like in ponds).  All plants need water, but having too much water or water that flucutates a lot is stressful to plants because it makes attaining oxygen difficult.  Only the toughest, coolest plants grow in wetlands, they're called hydrophytes or water-loving plants and have special adaptations that allow them to survive in wetlands. 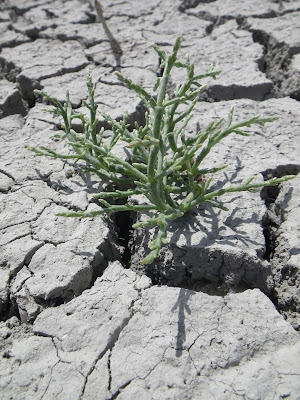 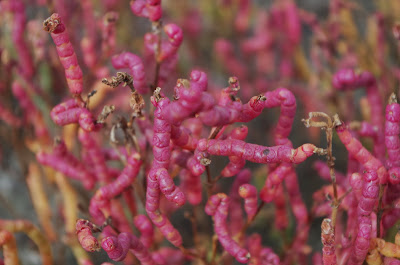 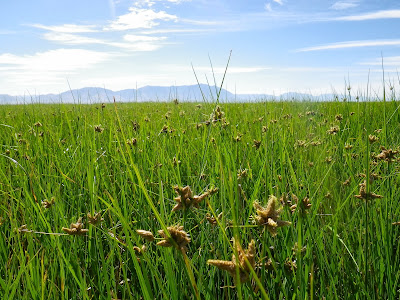 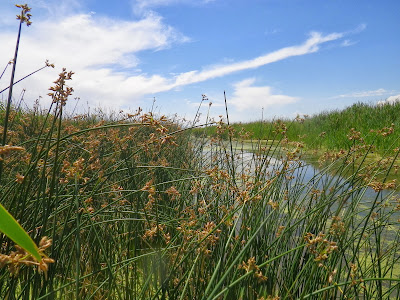 Lack of oxygen due to flooding also makes wetland soils different.  Without oxygen bacterial decomposers work slower and organic matter tends to accumulate as muck (which is exactly like it sounds) or peat.  The bacteria that survive in wetland soils often have to use an element other oxygen to complete cell processes that generate energy.  Nitrogen, manganese, iron, and sulfur are converted to different chemical forms by bacteria in flooded soils and that causes changes in color (in the case of manganese and iron) and smell (in the case of sulfur); these are the characteristics of hydric soils.
If that isn't enough to convince you wetlands are cool, they're also great places to spot birds!  Ducks, wading birds, colonial nesting birds, small birds, big birds, colorful birds, brown birds....  They come from all around (literally, because these birds are migratory) to eat, nest, and rest in the wetlands.  This is especially true around the Great Salt Lake.
2) Great Salt Lake wetlands are extra amazing.  Water is everything in wetlands.  Well, water is really everything everywhere, a post for another time.  Water is rare in the deserts of the western United States so wetlands are also rare, generally only comprising 1% of the total landscape.  But around the Great Salt Lake (GSL) there are more than 400,000 acres of wetlands, primarily at the river deltas.  When most people think of the GSL they see barren salt flats and water too salty for anything but brine shrimp, but that's only part of the story.
Three major rivers supply GSL: the Bear, Weber and Jordan.  The rivers begin high in the Uintah and Wasatch mountains and descend 6,000 feet before reaching the pancake flat expanses of the GSL, where there is less than a foot of elevation fall per mile of distance.  In fact, while the GSL covers around 1,700 square miles (more during wet years and much less during droughts) its deepest point is only 30 feet.  When rivers meet these flat spaces they spread out into meandering deltas that often support expansive wetlands.
The wetlands of the GSL have the freshest water closest to the rivers and the wetlands get saltier as they get closer to the main body of the GSL or farther upslope from the rivers.  The salinity of the water, as well as how deep and how long the water stays around, determine which plants grow in wetlands.  Where water is deepest and most permanent and fresh you get open water wetlands full of submerged aquatic vegetation (or SAV) commonly referred to as pond weeds, which grow completely under the water.  Ducks love this stuff because they can eat the seeds and roots, which are full of nutritious stuff. 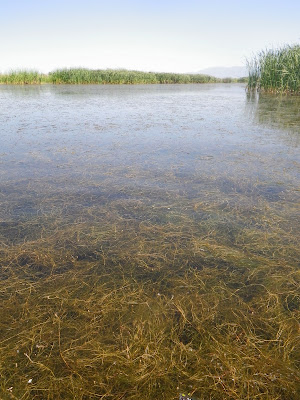 Where water is shallower, usually less than 1 foot, you find emergent marshes; these are the wetlands I study.  They're called emergent because the plants here grow up through (or emerge from) the water.  Cattails, bulrushes, sedges, and grasses are all types of emergent plants.  Water regimes, the patterns of flooding and drying within the wetland, can be very different in emergent wetlands, so emergent plants have the coolest adaptations to life in the water.  Birds love to nest in emergent wetlands, where they can find the materials to build and hide their nests. 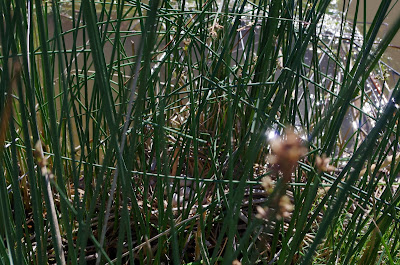 I've only got preliminary results so far, but I can see that impounded wetlands are different from un-impounded wetlands because they are usually flooded for a longer part of the year.  Because the water level is higher in the impoundments there are more wetland plants.  In wetlands where the water level gets really low (more than 2 feet below the soil surface) I've found more species of plants you would usually find in drier places (I call them weeds, because I don't think they belong in my wetlands).
Now that you've read through all of this, I need a favor from you.  Will you please do your snow dances or say your prayers about snow or send out your good snow ju-ju into the universe to help us toward a good water year in Utah?  Please?  Without a good winter this year I will have to do four years of field research, rather than three, because I need to see what GSL wetlands look like in a flood year, or at least a normal year.  Since I started my project we've had two pretty severe drought years.  I NEED MORE SNOW!  Another year of field work wouldn't be the end of the world, but it would definitely delay attainment of my doctorate, and I want it ASAP.

So there you have it, why I would study GSL wetlands and how I intend to determine the impact of impoundment.  And my desperate plea for snow.
Posted by Becka at 8:38 PM