Wetlands are Also Amazing Under the Ground

Last year I read this actual good advice on the Internet: 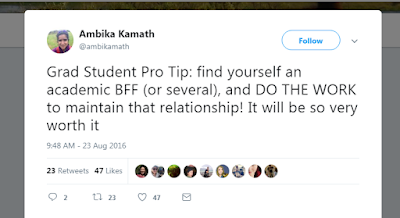 Eric (@MarshNinja) is my academic BFF, my mud brother, and a fellow marsh person who advised me, “The marsh giveth and the marsh taketh away.”  Through this friendship I got many good times as well as the chance to work on Chesapeake Bay, tend a greenhouse experiment, and ultimately help write a paper about it.  Academic paper writing is the worst, but slightly better with friends.

"Spatial and temporal variation in brackish wetland seedbanks: Implications for wetland restoration following Phragmites control" is a complicated paper, so I thought I'd try to tackle it visually and in four parts.

1. Why work on Phragmites?
2. Where and when did Phragmites research happen?
3. What are seedbanks?
4. How did the experiment work out?

1. Why Phragmites?  Phragmites is terrible, a literal wetland invader that conquers marshes and vanquishes native, nicer wetland plants.  Invading Phragmites is a problem across North America, and once it's in place we struggle to get rid of it. 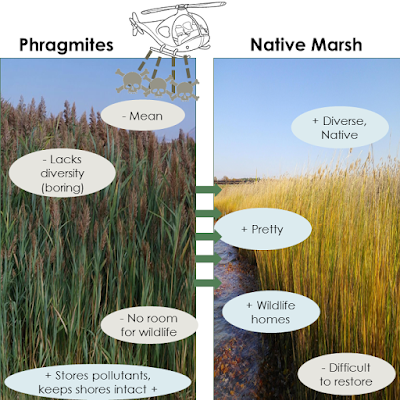 2.  Where and when Phragmites was studied.  Chesapeake Bay has been through some stuff.  In addition to being one of the first places invaded by Phragmites, it also supports a lot of people, hosts an international shipping port, and has a watershed covering six states with many potentially polluting land uses. 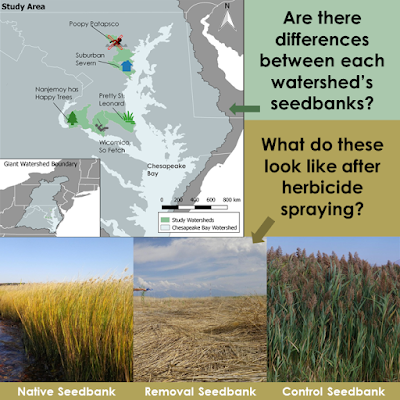 Eric's PhD work began in 2011, when he started an experiment to remove Phragmites from several wetlands across the Bay and see how marshes he herbicided (removal wetlands) compare to wetlands with untreated stands of Phragmites (control wetlands), and beautiful, uninvaded wetlands (native wetlands).  Eric measured a lot of wetland changes caused by spraying herbicide (like above ground vegetation and soil chemistry), but this paper focused on how seedbanks changed over three years in three types of wetlands (herbicided, Phragmites, and native) in five sub-watersheds with different land uses.

Are you getting a sense of the scale?  Altogether, Eric and his field helpers took 675 soil cores from frozen Maryland marshes, transported them to Utah, and made them grow in USU greenhouses.  (And that's a conservative guess: 15 cores per plot x three treatment plots per watershed x five watersheds x three years.)

3.  What are seedbanks?  Amazing, that’s what.  Seedbanks are soils chock full of new and old seeds.  Every year wetland plants make flowers, which are pollinated, which then turn into seeds.  Some seeds, like Phragmites seeds, float around in the air and drop to the ground miles away from where they started.  Other seeds float on the water, following ocean currents, tides, or streams to faraway places.  Seeds even hitch rides on animals, either latching to fur or being eaten and pooped, essentially migrating to new lands.  But the majority of seeds fall off their parent plants and end up in the soils near where they started. 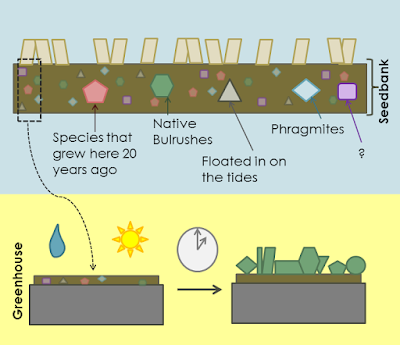 No matter how they got into the seedbank, seeds will wait patiently for the right conditions to sprout (or emerge) into leafy, photosynthesizing plants.  The right light, temperature, and flooding conditions are different for each species, so the actual growing plants in any spot are a small fraction of what is in the seedbank.  Some seeds can wait decades for their chance, just hanging out in the soil as layer upon layer of dead plants, seeds, and dirt build up.  It's called a “seedbank” because it's a sort of plant species savings account that can be cashed in during tough times, like after a hurricane wipes out all the vegetation or grad students kill it all with herbicide.  In an ideal world, seedbanks could be used to help with wetland restoration: if wetland folks can just give the seedbank the right conditions to grow (for example, through removing all the weeds) then good, native plants will come out. 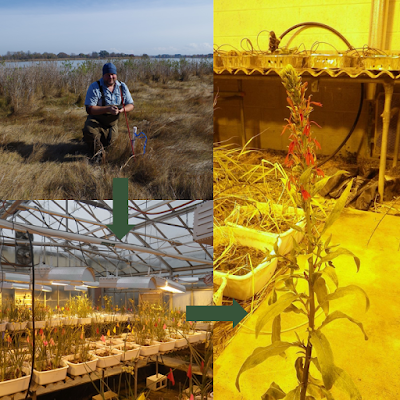 Eric's experiment involved growing all those seedbank samples in USU's greenhouses under real cushy circumstances: warm, well lit, plenty of water, lots of fertilizer and no competition.  The plant species that sprouted from the seedbank then show the history of each wetland and the potential plant species that would come up if a wetland were restored.  For the life of me, I can't figure out why there aren't more exclamation marks in seedbank papers.  The introduction to all of them should be, “We took chunks of dirt out of the frozen ground, added water, and got the marsh's underground secrets!”

4.  How did the experiment work out? We used some stats magic to characterize the hundreds of species that sprouted from the seedbanks into a few categories so we could compare all 45 marshes (3 experiment types x 5 watersheds x 3 years).  We were most interested in how big the seedbanks were (total seeds germinated), how many species were in each seedbank (species richness), how much of the seeds were invasive species, and how many different types of plants were in the seedbanks (functional diversity).  We hypothesized that seedbanks would be pretty different between the wetlands that had Phragmites and those that did not.  After three years of Phragmites spraying we also expected that the seedbanks would change, since the plants actually growing on the marshes changed.

Wetlands do what they want and they don't want to cooperate with our hypotheses. With a couple exceptions (there are always exceptions), the different experimental types (Phragmites removal, Phragmites control, and native) did not have distinctly different seedbank communities.  However, each watershed did have its own unique plant community, which increased the statistical difficulty of this project to DEFCON 2 (war is imminent).  Even more difficult to decipher was the fact that seeds mixed on the tides, so there were differences in the wetland seedbank community between the low and high elevations of any given experimental type.  One more wrinkle: Phragmites stems change how tides come in and out of wetlands, thus changing where tide-transported seeds will settle out.

In order to describe the general differences between wetlands in different watersheds and between experimental treatments, we lumped the seedbank sprouts into groups based on whether they were annual (fast growing species) or perennial (come back each year) species and native or invasive.  The hypothesis (and the hope in restoration) is that when Phragmites is removed you'll see lots of native species and lots of different types (grassy, woody, flowery) coming back to fill in the space Phragmites used to take.  While there were plenty of differences in the proportion of those groups across Chesapeake Bay, there weren't any consistent differences between Phragmites before and after herbicide was sprayed.

The other part of the seedbanks we looked at was how much of the germinating seeds are Phragmites, since it's a prolific seed producer and could swamp all the other seedlings.  This was a shot of good news: usually Phragmites was a small part of the seedbank, relative to all the other species.  The seedbanks were almost always pretty species rich too, which means that if the seeds in the seedbank were given a chance to grow then the wetlands where Phragmites was removed might look nice.  But here’s the kicker: the seedbanks were showing much different things than the actual plants growing in these wetlands.  Even worse, in some place the wetland melted into the Bay after Phragmites died because no plants came back to replace it.  Turns out Phragmites does have some benefits, especially in tidal wetlands, because it holds the wetlands in place (and a Phragmites-wetland is better than no wetland at all). 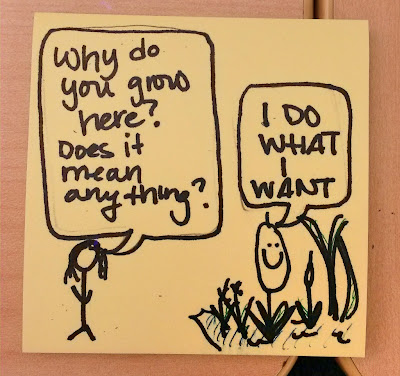 So, what to make of all the plots, other than accepting that wetlands do what they want?  The good news is that wetland seedbanks stay diverse even after Phragmites changes all the above ground diversity to zero.  The bad news is two parts.  First, places like the Chesapeake Bay are so large and complicated that factors we didn’t have time/resources/whatever to measure, like water chemistry or patterns of tidal flooding or history, will determine whether you get a successful restoration.   The amount of wind fetch, water column nutrients, sand dunes, or any other number of things might be more relevant to the seedbank and Phragmites restoration than the things we could actually measure.  Second, even with healthy seedbanks, plants aren't coming back following herbicide spraying so we've got to invest in planting live plants, which is pricey.

Want to read more of the paper’s juicy details?  Of course you do!  I only covered half of the results here.  You can find the whole thing in the online September issue of Estuaries and Coasts