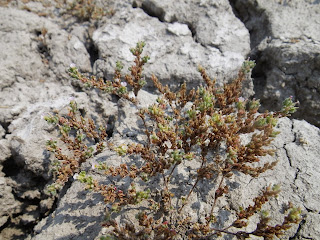 Most people, myself included, will tell you science is successful due to lots and lots of hard work.  For any given question I start by learning everything possible about the subject (two days of reading the top results from a Google Scholar search should be good), then I apply that knowledge in field observations or an experiment, gather data thoroughly and objectively, and finally arrive at answer.  What you don’t hear often enough is the role of luck in getting science done.  All the hard work and preparation in the world still won’t prevent unexpected issues from coming up.  In fact, often graduate school feels like a succession of unexpected obstacles foiling my best laid plans.  But being in graduate school has also made me lucky enough to be in contact with people who have better, fresher perspectives on things I’m struggling with.  It’s really the only way I ever complete anything.

After an unlucky week of field work I’m particularly aware of how far good luck goes in getting a project successfully completed.  In the last few days rain has prevented me from flying the drone I really needed to get in the air, a fox flushed the birds I was trying to record with the drone one of the few times I could fly, and someone burnt down one of my monitoring wells.  Plus I lost my favorite ruler running away from lightning.  But I’ve had some good luck too, and that’s what I’d like to talk about here.  My winding journey in life and work has been a series of fortunate encounters and experiences.  There has certainly been an inordinate amount of tears shed, blood drawn, and stuff lost, but more importantly, I’ve gotten to meet interesting and inspiring people who have facilitated my work doing basically whatever I want.  Any breakthrough I’ve had has been 70% toil and 30% luck in talking to the right person at the right time.  As idealistic and optimistic as all of this sounds, ultimately having to rely on luck is frustrating because I have no control over it.  However, if graduate school has taught me anything, it’s to celebrate the lucky moments.  Below is an example of struggle and luck that played out this last semester
.
The goal of my PhD research project is to understand the impact of water management on wetland health and one of the best ways to measure health is by looking at what plants are present in each wetland.  Every summer from July 15 to August 15 you can find me hunched over looking at plants all over the eastern shore of the Great Salt Lake.  When I find a plant I’m not sure the identity of, I pull a sample, press it, and identify it later in my office.  Plant identification seems straightforward on the surface, it involves following dichotomous keys (a series of choices between two options) that will lead you to the correct plant.  However, following a series of decisions is only doable if important identification features (like flowers or seeds) are present on the specimen you gather and if you have the appropriate plant guide.  Anyone who tells you plant ID is easy is lying.  Sure, the rules for plant identification are clear, but that does not mean they're easy to follow.  And they change all the time.

Over the course of my work I’ve gathered more than 300 plant samples identified to 109 species, but one species in particular, found in one of my 50 sites, has caused me more grief than all the rest.  It’s difficult to tally the amount of time I’ve wasted just reading through the descriptions of each plant family this species might belong to, but with no luck.

Here is what I know about the plant:
With all of that information I should have been able to identify this plant, but none of the descriptions I read matched.  Lucky for me, I complain about plant identification a lot to anyone who will listen.  One day last year I was talking with Christine, another graduate student in my lab, about the afternoon I had spent identifying plants and she was telling me about her afternoon spent tending a seedbank study.  We quickly figured out that we might both be stumped about the same plant, even though neither of us had a good picture of said plant.  We discussed it later while actually looking at the sample I had pulled from the field and still couldn’t figure out what it was, but I felt better knowing someone else, someone who is really bright, was also stumped by that silly plant.  The subject came up again in January of this year and Christine had the idea to read through a new plant ID guide she had.  A couple of hours later this email came through and no other email I received this semester has made me anywhere near as happy. 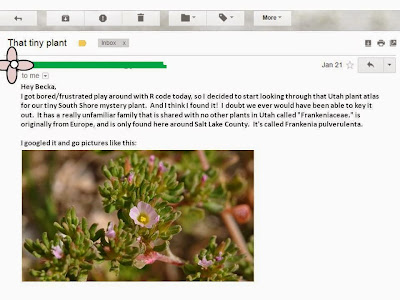 How amazing and lucky is that?  We both had the same unknown plant, we talked to each other about it, and then she found it AND let me know about it!  After all the times I’ve read through the plant books I had, I’d still never have identified that plant because Frankenia pulverulenta wasn’t listed in the book I used most (unlucky for me, it’s listed in an old Utah Flora that I don’t look at closely).  For all of the hard work on my part, credit for the breakthrough goes to Christine and I just count myself really lucky to work with her.  It would be easy to blow this off as just a fluke, but moments like that happen regularly enough that I feel confident in my statement that science is 30% luck.   For example, hiring the most wonderful technician ever happened because my advisor knew someone who knew David and he applied for the job.  Marsh llama has been the saving grace of my entire project, and I only saw it because I was lost.  Upwards of 40% of my success in R has been due to lucky Google searches and someone else having the same problem.

The flip side of all of this, of course, is that bad luck is also a major component of science.  But since luck isn’t something you can build into an experiment, I think the lesson is to avoid fretting as much as possible (because I just can’t control the weather), work hard, and make sure to say thank you to the people you’re lucky enough to know.  Oh! And ask lots of questions, other people are nice and know so many things I don’t.

For a long example of some bad luck, see this story.
Posted by Becka at 3:51 PM No comments: