Plants are the Coolest. That is All.

Exciting news! I’ve spent the last two years working on a guide to the plants found in Great Salt Lake wetlands and it’s finally published online!  You can download it for free HERE.
First, a word about collaboration.  Group projects get a bad name because they are frustrating while you’re in school.  However, ‘Wetland Plants of Great Salt Lake’ only exists because of a group of coauthors.  I had loads of plant pictures, but Karin and Mark had the vision, encouragement, and funding required to turn my original PowerPoint presentation into an Extension publication.  Maureen brought a passion for communicating science and great bird knowledge to a guide that was originally just about plants.  And Jennifer’s document design and technical communication skills pulled it all into a beautiful and cohesive book.   It was difficult sharing control of a project that was so close to my heart, but I’m happy I did because my coauthors made into something really wonderful.  The peer-reviewers were also great; plant identification is hard and their corrections were awesome.  The plant guide is one of the outputs from grad school I’m most proud of.

Dichotomous (or ‘two-choice’) keys are the traditional tool for identifying plants.  They’re like a Choose Your Own Adventure. You begin at the top with a plant that could be any one of 400,000 extant species and following a series of decisions based on what you see in your plant you arrive at its one true identify.  Using keys is neither simple nor fun (I have to leave it at that.  I don’t have the emotional energy to address taxonomy or shy plants that won’t show me their sexy bits).  Luckily we have a manageable number of species (136) around the Great Salt Lake (GSL), so the guide relies of pictures and wetland type rather than keys.  This option is both aesthetically pleasing and completely justifies the thousands of plant pictures I have taken.

Four basic types of wetlands exist around GSL and the only key I’ll present is one to help you decide which type of wetland you were standing in when you found the plant you’d like to identify.

One caveat: plants do what they want, so many species can be found in multiple communities and might just pop up in a completely unexpected place.

Plants have four basic parts – flowering parts, stem parts, leafy parts, and underground parts – all of which are modified in cool ways to allow plants to survive in wetlands.  Each part is also important in plant identification. 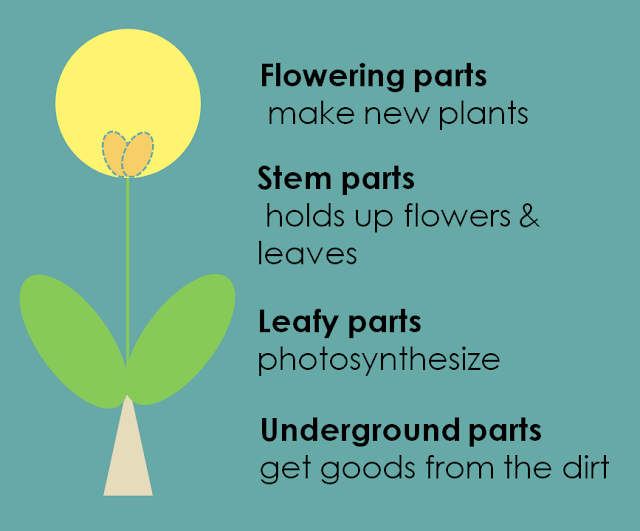 In wetlands, water, light, and nutrients – the things plants need to live – are present in extreme quantities.  In order to cope with having too much or too little of what they need, wetland plants have developed bad-ass features like stems that pickle, hitch-hiking seeds, cloning capabilities, and floating parts.  I highly recommend heading out to the wetlands yourself to poke, pluck, and sniff all of the plants yourself, but here’s a quick preview of some of my favorite plants from each wetland type along with their key identifying features. 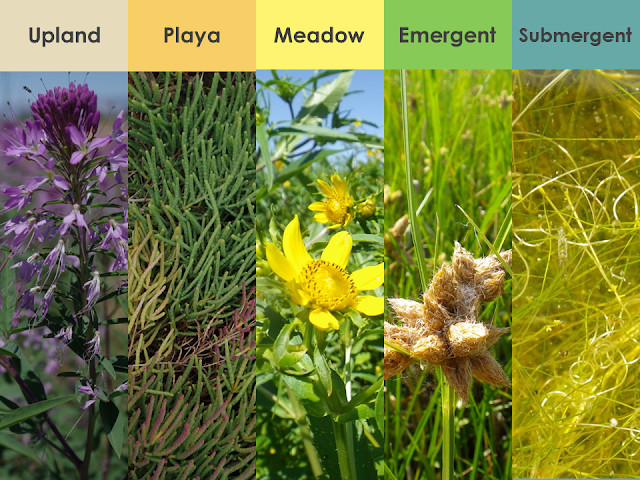 Globally, only about 6% of the land surface is actually wetland, so non-wetlands (which we can call ‘uplands’) and their plants show up in or near wetlands.  Upland plants add some nice color to generally green marshes and wildlife like them because it’s nice to hang out in dry places sometimes. 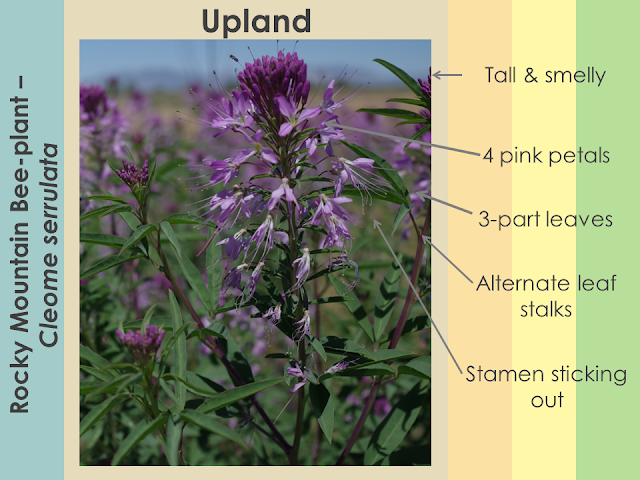 I’m smitten with the Rocky Mountain bee-plant (Cleome serrulata).  This beautiful, stinky species has big purple or pink flowers.  If you look closely you can see each flower has stamen (the plant parts that hold pollen) sticking out.  Bees trying to get at the nectar deep in the flowers will rub those stamen, taking some pollen in with it, which will be dropped on the next plant that bee visits.  This is pollination and it’s how plants avoid in-breeding without all the travel usually required to move genetic material.

Playas are the coolest!  They’re only flooded during big storms or high runoff, remaining dry and salty for most of the year.  The plants and bugs in playas only sprout or hatch when conditions are just wet enough for them to complete their life cycle; migratory birds are keyed into that so flooded playas are filled with gorging birds. 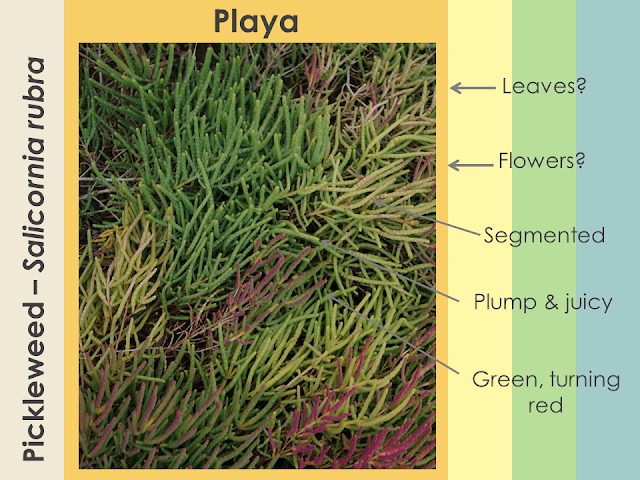 My absolute favorite plant of all time is pickleweed (Salicornia rubra).   Pickleweed leaves and flowers are just scales, which saves lots of water from being wasted.  The segmented stems are plump, a feature called succulence, because they’re full of concentrated salt water, which allows pickleweed to thrive in some of the saltiest places on Earth.  The fluid filled stems are so salty they can actually be used to pickle other plants.  In the fall the stems turn from green to red and spit out the seeds hidden under the scales, a process called dehiscence.  Fun fact, you can and should nibble on pickleweed.

Meadows are flooded or saturated (i.e., muddy) for most of the year, but it’s hard to see the water because it’s just under the soil surface or covered by lush plant growth.  I have complicated feelings about meadows – there are so many species J, which means a lot of work with dichotomous keys L  – but I really like nodding beggarstick. 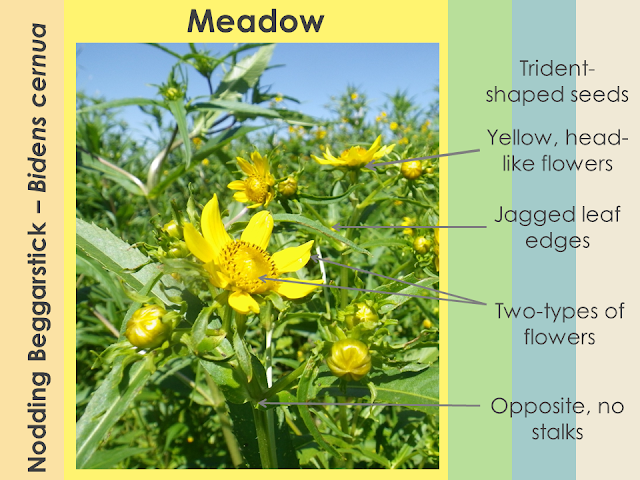 Beggarstick (Bidens cernua) is an aster or composite flower: each flower head is made of many flowers.  The things that look like petals are ray flowers and the pokey things in the center are disk flowers. Each flower produces a seed (that’s a lot of seeds) that is shaped like a trident with 3-prongs, which are perfect for hitching a ride on an animal or ecologist struggling to get through a mass of beggarstick.  This form of seed dispersal makes it possible to again spread genetic material around without having to be mobile.  Plants are crafty like that.

Emergent wetlands look like your typical marsh: lots of bulrushes and cattails growing up through the shallow water.  Water levels in emergent wetlands often fluctuate from wet to dry so the plants in those wetlands are darn tough. 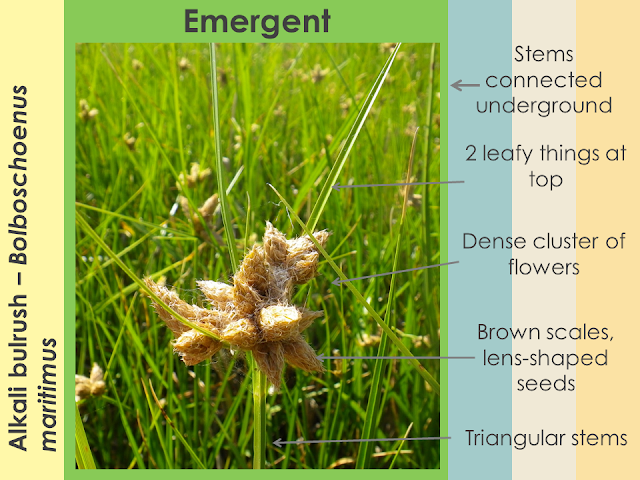 Alkali bulrush (Bolboschoenus maritimus) is everyone’s favorite emergent wetland plant.  It forms large loose stands that are ideal for hiding nests in and the seeds are super delicious to ducks.  Just beneath the surface many of the plants are connected through underground stems called rhizomes that store plant food over the winter and sprout new stems each spring if soils stay flooded – this means sometimes all those individual stems are actually clones of each other and can share water, gases, and food between them.  However, alkali bulrush can also sprout from seeds if a wetland dries out – it needs heat and sunlight for that – so this species can live in a huge variety of wet and dry-ish wetlands.  Even cooler, alkali bulrush seeds can survive being in a duck’s stomach and will sprout after being pooped out wherever that duck chose to fly.  It’s almost like a migratory plant species.

I’ve been using the common plant names, which is frowned upon in academic circles, but it works best for me in wetlands.  First of all, common names are easier to remember and more widely known than scientific names.  Secondly, as taxonomists learn more about how closely or distantly related plant species are they keep changing the scientific names.  I have to assume their intentions are good, but the result is often confusion.  Since I started grad school the genus alkali bulrush belongs to has changed from Scirpus to Schoenoplectus to Bolboschoenus.  Gah!  Using the most recent scientific name is one of the fastest ways to develop a failure to communicate. However, in the guide book linked here we’ve included synonyms – all the common and scientific names a given species could be known by – in order to enhance communication about plants.  Definitely talk with other people about your plants by whatever name your heart recognizes.

Several years ago, I heard a manager refer to submergent wetlands as ‘duck soup’ – a giant bowl of deliciousness waterfowl gorge on.  Submergent wetlands might look like simple, serene ponds, but at their healthiest the underwater world is teaming with plant and bug life. 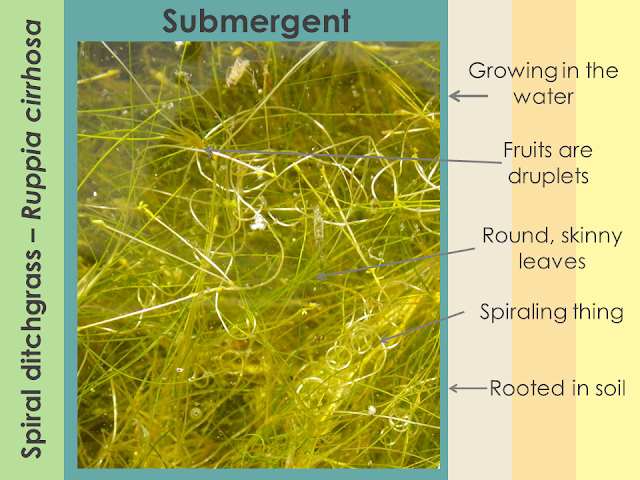 Spiral ditchgrass (Ruppia cirrhosa) is a species of submerged aquatic vegetation – a plant that can grow in the water instead of outside it.  Spiral ditchgrass reproduction is adaptable: it can regenerate through underground parts called tubers or through floating seeds. Even the stems are amazing, they’re flexible enough to droop and spread when water levels fall or they can grow fast when water levels rise and they need to reach sunlight.  The stems and leaves can even photosynthesize under low light levels.  Plus all the parts, from the floating flower parts to the underground tubers, are delicious and nutritious for birds.  The spiraling peduncles (flower stalks) are my second favorite identifying plant feature, fun to say and fun to see.


Now that you’re armed with a little info on wetland plants, make a visit to your local wetland.  I put together a map of northern Utah wetlands here.
Posted by Becka at 11:30 AM No comments:

Utah doesn't have many wetlands, but the wetlands we have are so great!  I’ve put together a map here with some of the wetlands places along you can visit.

Please follow all the posted signs: read fun facts about the wetlands, stay off roads that shouldn’t be driven on, and give nesting birds the space they need.